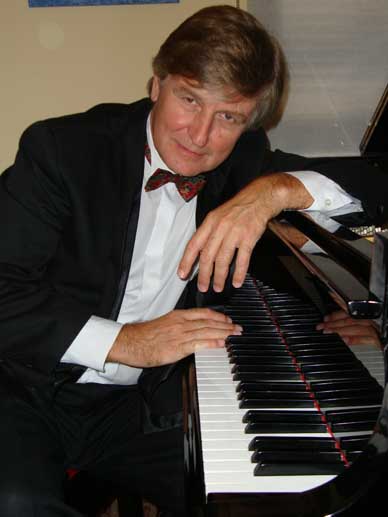 Gennady Dzubenko
Piano
Gennady Dzubenko graduated from the Moscow Tchaikovsky Conservatory as a pupil of M. Mezhlumov. He did postgraduate studies at the Moscow Conservatory with professors L. Vlasenko and M. Pletnev. He is a winner of the Rachmaninov and Mussorgsky Piano Competitions. His teacher, Professor Lev Vlasenko, wrote about G. Dzubenko: “The pianist possesses a great talent and is a master of various techniques and tonal variation. His romantic expression combines with the noble manner of his performing.” Since 1980 he has performed as a soloist and collaborated with various chamber groups: “The Romantic Trio”, Duo “Palau-Dzubenko”, “Trio Mediterrani” etc... He has an extensive solo and chamber repertoire. He has performed in Spain, Germany, France, Australia, Japan, USA, Lithuania,Hungary, Luxembourg, Croatia, Portugal etc... G. Dzubenko records regularly for CDs and radio broadcasts. His recordings have been broadcasted many times in Moscow for audiences of both the Russian capital and the entire country by the following stations: Radio Russia, Orpheus, Mayak, Russia Radio International, as well as by Russian National TV and, internationally, by Radio France ,Catalunya Mùsica, RNE –Classics, etc... Dzubenko takes part in many international festivals and master courses of interpretation and participates on the jury in international piano competitions. In 2004, G.Dzubenko was named dean of the piano faculty at the A. Shnittke Music Institute in Moscow. Currently, G.Dzubenko lives in Spain where he is a professor of piano at the Issac Albeniz Conservatory in Girona and at the Luthier School of Music in Barcelona. Videos: Gennady Dzubenko: Preludi de Rachmaninov Gennady Dzubenko: Visions Fugitives op.22 de Sergei Prokofiev Gennady Dzubenko with his student Michael A. Haeringer