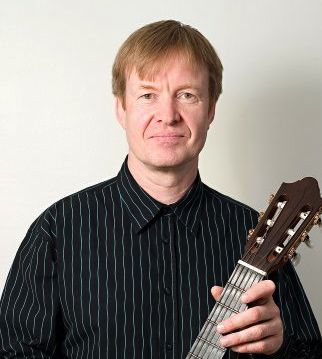 Arnaldur Arnarson was born in Reykjavík, Iceland. He began studying the guitar in Sweden at the age of ten with Sten Ljungdal and continued the following year at the Tónskóli Sigursveins D. Kristinssonar in Reykjavík with Gunnar H. Jónsson. In 1978 he entered the Royal Northern College of Music in Manchester, obtaining his Graduate Diploma in 1982. His teachers there were guitarists Gordon Crosskey and John Williams and the Greek conductor and pianist George Hadjinikos. He did a year of postgraduate studies with José Tomás in Alicante, Spain and has received notable advice from Oscar Ghiglia, David Russell and lutenist Hopkinson Smith.

A prizewinner in several international competitions, Mr. Arnarson took 1st prize in the XXI "Fernando Sor" International Guitar Competition in Rome in 1992. The same year he was the only guitarist amongst over a hundred candidates to reach the finals of the "East and West Artists" competition in New York, an international contest open to instrumental soloists and chamber groups.

His repertoire ranges from the Renaissance to the present day. Being a distinguished interpreter of the music of Bach he was invited in 1985 to give a series of Bach recitals all over Spain. His highly acclaimed performance of the Concierto de Aranjuez by Rodrigo with the Icelandic Symphony Orchestra in 1990 and his solo recital at the Reykjavík Arts Festival in 1992 have contributed to establishing him as one of Iceland's foremost instrumentalists. His performance in November 2000 as a member of the Ensemble Barcelona Nova Música at the SGAE Auditorium in Barcelona caused a sensation. Apart from his solo work giving recitals and performing with orchestra, he frequently plays with singers and other instrumentalists, string quartets and other chamber groups. He has given concerts around Europe, Australia, Latin America and the USA.

Arnaldur Arnarson made his home in Barcelona in 1984, where he is co-principal and teaches guitar at the Luthier School of Music. He has given Master Classes in guitar and chamber music at a number of conservatoires and universities in Europe and the USA, e.g. at Boston University, at the Wigmore Hall in London and at the Alfred Schnittke Institute in Moscow. He is also the director of the first master programme in musical interpretation with an official recognition in Spain, offered by the Luthier School of Music in collaboration with the Blanquerna Faculty at the Ramon Llull University in Barcelona. He has been a jury member at several international music competitions.

His recording for Merlin Classics of works by Ásgeirsson (world premiere recording), Bach and Sor in 1999 has been highly acclaimed internationally.