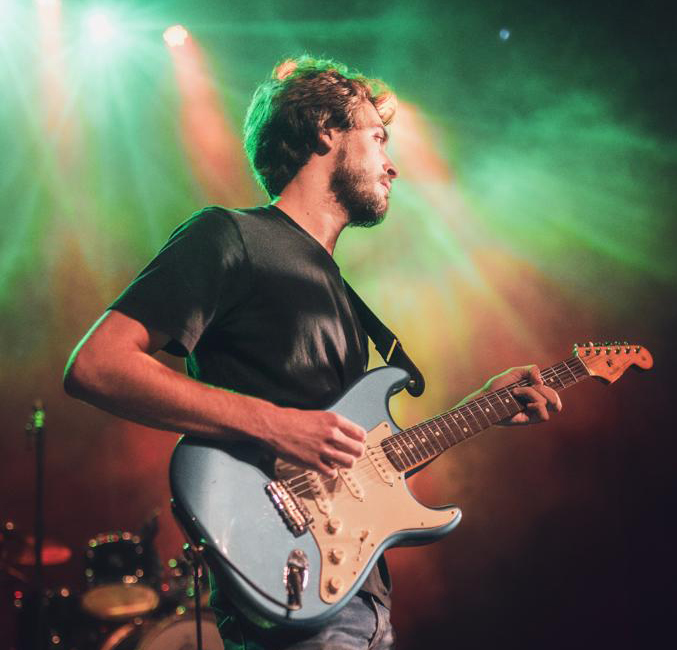 Jordi Pitarch Granell
Guitarra eléctrica
Jordi Pitarch is a jazz, blues and modern music guitarist who began his musical studies in 2009 in a self-taught way and little by little he began to attend classes regularly, which led him in 2014 to study at Aula Músics de Tarragona, a school linked to the program Berklee School of Music, Boston. He began to become professional in the musical field, and to choose it as a way of life, in 2015 when he entered the Taller de Músics Escola, a space that allowed him to meet and enjoy the tutelage of great masters and figures of the Barcelona jazz scene such as Santi de la Rubia, Vicenç Solsona, Jordi Matas or Jordi Farrés, apprenticeships that form him to finally become part of the ESEM Taller de Músics in 2018, where he is studying the Higher Degree in Modern Music and Jazz. During these years, in addition, he attends master classes of great musical references such as Bill Frisell, Jorge Rossy, Hector Parra, Guillermo Klein among others. Likewise, during the course of his studies, his presence on stage has been notorious, being guitarist and arranger for the cover group Apastafunk (2018 - act.), for the presentation of the album A Boat To Eternity, by musician Robert Revolbert (2019 ), guitarist in the itinerant theater and music show of the Zigurat Band formation (2021), of the production company El Gran Mogol and, also, as producer, guitarist and keyboardist of Non Jambi (2021 - act). Currently, Pitarch continues performing on stages such as the Jardins de Pedralbes Festival (2021) in Barcelona or the FICCAT (2018) in Tarragona, without neglecting its more pedagogical facet, which began in 2016, and that thanks to all the teachers who have gone through his career, the techniques learned and the love for the guitar, the study of the instrument and the respect for art and music, face classes as a tool for self-knowledge and personal growth through music.