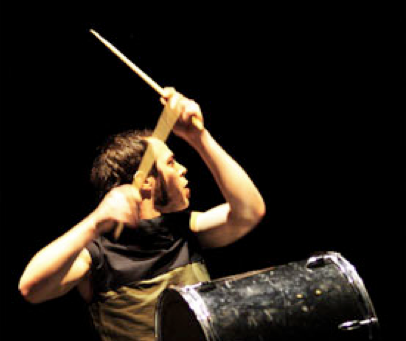 Gustavo Hernán Sassone
He was born in Buenos Aires, Argentina and started playing drums with his school friends. From that moment, he had the opportunity to participate in different groups and projects, of different styles, which enriched him musically. - Initially self-taught, later he studied drums with Pablo La Porta, and then different latin and african percussion instruments - Later in Barcelona, he studied in L'aula of modern music and jazz, and at the Taller de Músics of Barcelona. He also studied drums with Enildo Rasúa (Cuba) and Aldo Caviglia (Uruguay), and African percussion with Mamadou Kane (Senegal) and Ayao Logosse (Togo). He also participated in workshops of international artists such as Horacio "el negro" Hernandez (Cuba), Dom Famularo (USA), Jojo Meyer (Switzerland), Calixto Oviedo (Cuba), Richie "gajate" Garcia (Puerto Rico), Omar Hakim (USA), Christiano Rocha (Brazil) - Over the years he has performed in the main concert halls in Barcelona, as well as in countless venues and theaters from all over Spain. He has also toured the United Kingdom, Israel, the United States, France, Argentina, Austria, Andorra and Italy with different musical projects. -He played percussion for the dance company “Tapeplas” with whom they have toured different theaters and festivals throughout Spain and UK - Participation as a percussionist in the 20th EUROPEAN ATHLETICS CHAMPIONSHIPS GALA, together with musicians Nacho Cano (Mecano) and Salvador Niebla - He collaborated as a percussionist in the recording of the music for the show L'ESTACIÓ by the dancer Laia Molins, together with the musicians Cesc Miralta, Marc Miralta and Viçens Solsona among others (2010) - He made the music for the documentary "La Mirada Perpetua" of the cuban director Alexis Yero (2011) - He performed in different cities of Israel with the Sharon Lavi´s dance company, playing also with the singer Harel Skaat (2011) - Percussionist of the campaign "Nokia Music", May 2009 - He participated as a speaker in TEDxGracia, in 2016 - In 2012 he started to collaborate with the brand of Turkish cymbals IMPRESSION CYMBALS (www.impressioncymbals.com) and in 2017 he started working with the brand of drumsticks Sheng Yin - Throughout these years he did a lot of team building activities, events and television spots for different companies like Hewlett Packard, Seat, Desigual, Condis, Pink Fish, Deloitte, Schweppes, Vodaphone, Nokia, Canal Sondeo, X-ploreexpeditions, Dwaka Adventures, Ok Team, among others - Currently among other projects, he is a drummer of the ALMA AFROBEAT ENSEMBLE, drummer of the Guinean singer NAKANY KANTÉ and a percussionist for the SHARON LAVI´s dance company