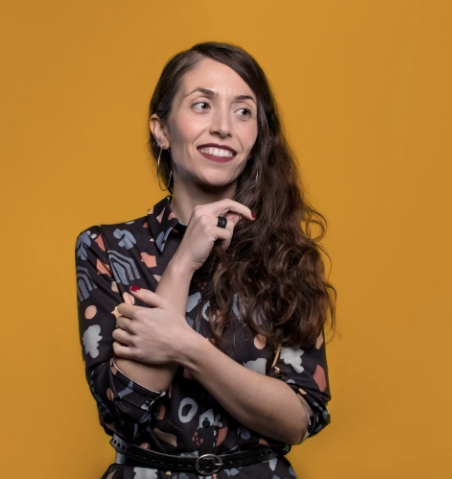 Laura Milazzo
Italian singer based in Barcelona, Laura Milazzo studied at the Taller de Músics where she deepened her knowledge of Jazz and Modern music. She studied with Diana Palau, Sabina Witt, Anna Luna, among others. She has also participated in master classes with relevant international Jazz figures, such as Cyrille Aimée and Michael Kanan.
In 2016 she begins to perform on different stages in Barcelona and she collaborates with musicians such as Aupa Quartet, Jorge Da Rocha and Caterinangela Fadda. In January 2019 she launched  the Italy in jazz project, together with the guitarist Aleix de Gispert, a tribute to Italian music of the 60s and 70s. This repertoire gave birth, one year later, to her first album Tutta colpa della musica, which was recorded together with Aleix de Gispert, Pau Lligadas on double bass and Nazzareno Brischetto on trumpet.
During the last years she presented the album at different venues in Barcelona, such as the famous jazz club Jamboree and in festivals such as "l'Hora del jazz".
Currently she is also part of the Traveling Jazz project together with the guitarist Joel Moreno Codinachs, she is the leader of Laura Milazzo Trio and she is completing her Bachelor degree in Jazz and Modern Music at Taller de Músics.