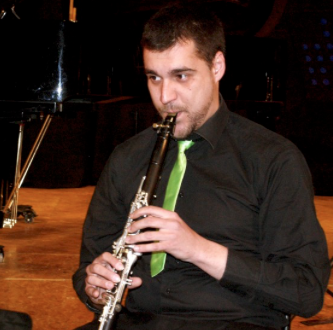 José María Martínez Felipe
Clarinet
Born in Valencia, begins in the clarinet at age of 6 with the teacher and band director in its time José Miguel Mico, at the school of music "L'artística Manisense" of Manises (Valencia). In 1999 performs tests of access to intermediate level at the Conservatory of Music "San Esteban" in Valencia,  receiving Honorable Mention in the Final Year Award. In 2005 he entered the Conservatorio Superior de Música de Catalunya (ESMUC) receiving Josep Fuster classes and finishing his studies in June 2010 with a rating of Excellent. Professionally, has made several performances with different orchestras and groups, of which included the OBC, Palace of the arts Reina Sofía (Valencia), OSV, ONCA, Municipal Band of Barcelona, TNC, Frontela Quintet, Quatre+1 Quintet and two performances as a concert soloist in the bands of Manises (Valencia) and Alcazar de San Juan (Ciudad Real). In them, he has worked with directors as Roberto Abbado, David Niemann, Egmont Colomer, Salvador Brotons, Eiji Oue, Christian Lindberg, Cristobal Halffter, Josep Pons, Ramón Tébar, Joan Albert Amargós, Rubén Gimeno, Vicente Alberola, José Lluís Estellés, Víctor Pablo Pérez, Jordi Mora and Xavier Puig among others. He has taken several courses with José Tomás, Josep Fuster, and Jordi Mora, as well as master classes with Cecilio Vilar, Anthony Pay, Vicente Alberola, Jose Luis Estelles, Wolfgang Meyer, Enrique Perez and Ricardo Ríos. Among youth orchestras, has been a member of the JONC in 2006 until 2009, and JONDE in 2009-2010. In teaching, he has taught instrument classes for more than 15 years, both individual and group, in music schools and conservatories in Valencia and Catalonia.