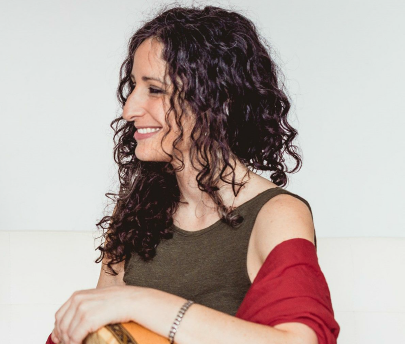 Ariana Barrabés Romeo studied Music in the Modern Music and Jazz Department of the Liceu between 2004-2010. From 2005-2009 she learned and performed with the Cor de Gospel del Liceu. In 2005 she created the Evoéh project, a Spanish music and poetry duo, with which she continues to play, having already recorded four albums. During 2006 she made several works for the advertising industry, with the company Tsunami and the production company Soimagic. From 2005 to 2007 she took part in Bell Canto studios and Eastern music by Ellen Gould. From 2007 to 2015 she participated in the jazz-flamenco fusion project Camini, previously called Flameland. She has expanded her vocal technique with classes by Isabel Soriano. From 2008 to 2011 she was a teacher of singing and choir at Estudi de Música de Vilassar de Mar. She has also taken high improvisation specialization classes with Joey Blake, Alessandra Patrucco and Bob Stoloff. In 2009, she took the gospel choral conducting course taught by Ramón Escalé and various members of the Gospel Network of Catalonia. She has studied Estill Voice Training (Voice-craft), a technique by Hellen Rowson, achieving the levels 1 and 2. From 2010 to 2013 she taught singing and choir at the Trémolo school in Barcelona. She was also a singing teacher at the Unió Filarmónica del Prat and at the A Tempo school in Barcelona. She has received oriental percussion classes by Omar Kattan and a masterclass with Glen Vélez. In Sant Feliu de Llobregat, she directs the Gospel Link choir. She teaches modern singing and jazz in Sabadell. In 2015 she obtained her Higher Degree in music at the Higher School of Music Studies - Taller de Músics - ESEM, with her thesis and final research project dedicated to the melodies of the Judeo-Spanish oral tradition entitled: "Cantadme galanica: Magic in the voice of the Sephardic woman". This project obtained the highest rating of the promotion, and is endorsed and directed by the doctors in Musicology Santiago Galán Gómez and Francesc Xavier Alern Vázquez. In 2016, he deepened in traditional percussion by learning from Aziz Khodari. He made an old music course with Abdelaziz Samsaoui in 2017.